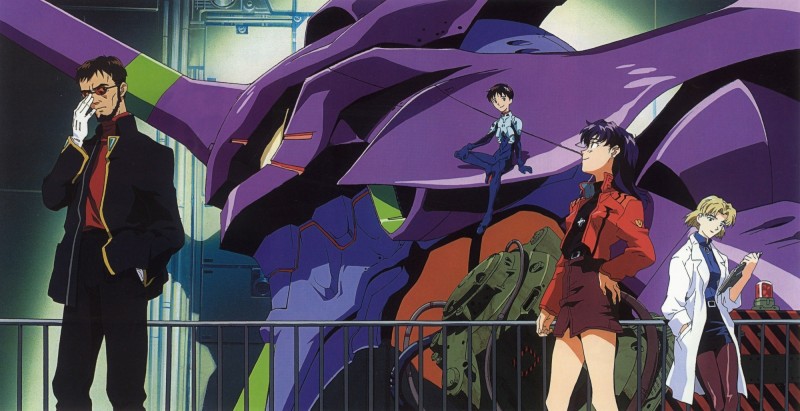 The classic anime Neon Genesis Evangelion hits Netflix today. If you haven’t seen the show, it’s basically a gut-wrenching sci-fi tale about people confronting the demons within themselves while trying not to break under the weight of a looming apocalypse. Also, it has giant smashy mechas that tear kaiju monsters to bits and alcoholic ne’er do well penguins that serve as comedic relief.

Evangelion, to its most ardent fans, is more than just grimdark Gundam. It’s a messy epic about broken people told within the confines of classic sci-fi tropes. Expectations are subverted at every turn, and characters are not so easily categorized with labels like “hero” and “villain,” or even “likable” versus “unlikeable.” The most compelling thing about Evangelion in the end is that its characters are as close to real people (deeply flawed but deserving of sympathy) as fiction gets. There’s no other show quite like it. Even the anime that draws inspiration from (and comparisons to) Evangelion never quite manage to hit the same balance.

However, video game creators have a fondness for throwing outlandish pulp concepts against high-brow literary ambitions, and their projects often find a strange thematic kinship with Evangelion. To that end, we’ve compiled a list of games that exist within that strange space: somber characters inhabiting fantastical worlds, creating compelling and unique experiences.

Whether you’re a longtime fan or a gamer tuning to Evangelion for the first time, the games on this list can provide an alluring mixture of tragedy and pulp. 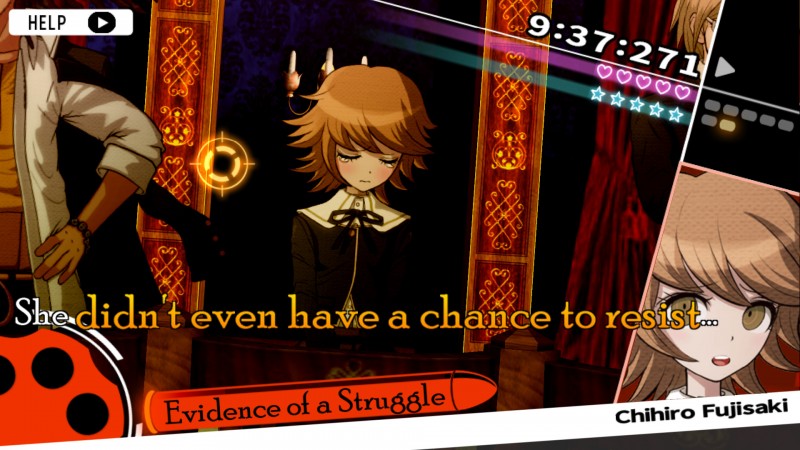 Danganronpa is half-visual novel, half-puzzler that casts you as a teen trapped in a school where an insane remote-controlled bear forces you and your fellow students to live in said school forever…unless a student can murder their classmate and get away with it. A madcap tale filled with dark humor and a surprising amount of pathos, Danganronpa’s tether to Evangelion goes deeper than just anime-style visuals. 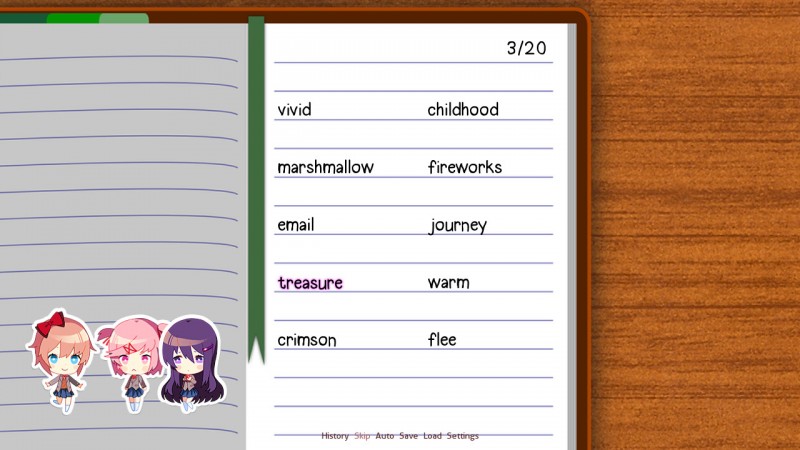 The less said about Doki Doki Literature Club, the better; we don’t want to taint your experience with spoilers. However, if you’re in search of something where your expectations will be thwarted and things are darker than they appear, this visual novel is for you. 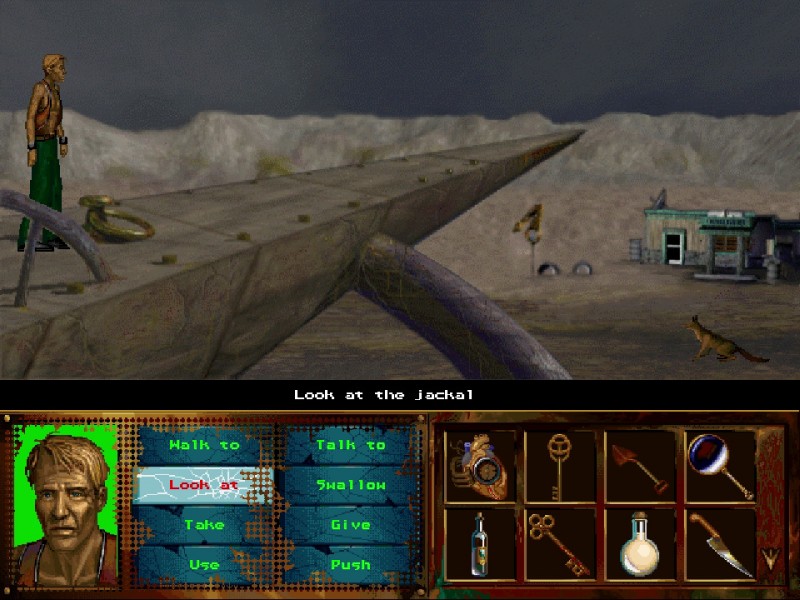 I Have No Mouth And I Must Scream

Based on Harlan Ellison’s bleak short story of the same name, I Have No Mouth and I Must Scream is a point-and-click adventure that’s absolutely relentless in its pursuit of despair. Bound to be tortured for an eternity by an evil supercomputer, the all-too-human cast of is doomed to confront the sins of their past over and over unless they can defy the A.I. and break the cycle. However, the cost for doing so might be too steep for them to bear.

Even years after its release, like Evangelion, I Have No Mouth and I Must Scream still has the power to horrify and disgust as the game tackles themes like self-harm, sexual abuse, white supremacy, and suicide.

For an in-depth look at the making and legacy of I Have No Mouth and I Must Scream, check out our feature on the game here. 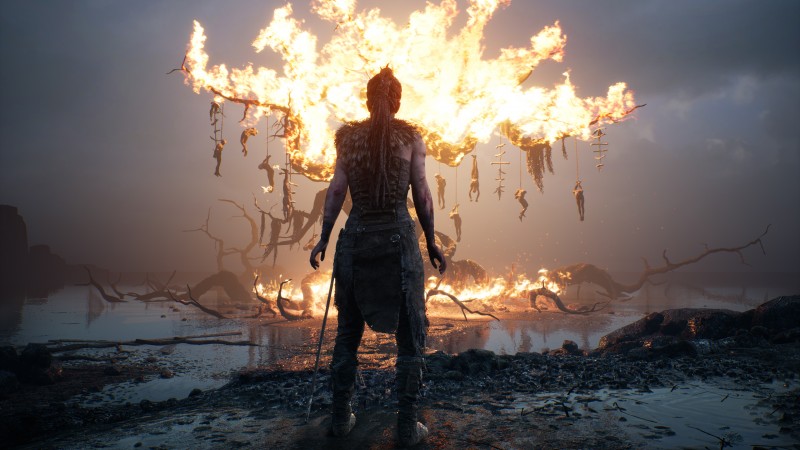 Much of Evangelion‘s story is obsessed with protagonist Shinji’s crippling doubt and anxiety, which often overwhelms him to the point of rendering him helpless when his friends need him. The self-loathing and search for acceptance that emerges from his condition amounts to one of the most paradoxically rewarding and heartbreaking narratives in the show.

Similarly, Hellblade confronts the mental illness of its own protagonist and skillfully finds a way not to belittle her or turn her into a caricature. Instead, Senua emerges as one of this generation’s most memorable heroines in a dark, grueling journey that articulates for many what it means to take on overwhelming emotional obstacles. For more on Hellblade, check out editor Elise Favis’ piece on how Hellblade helped her confront her chronic illness. 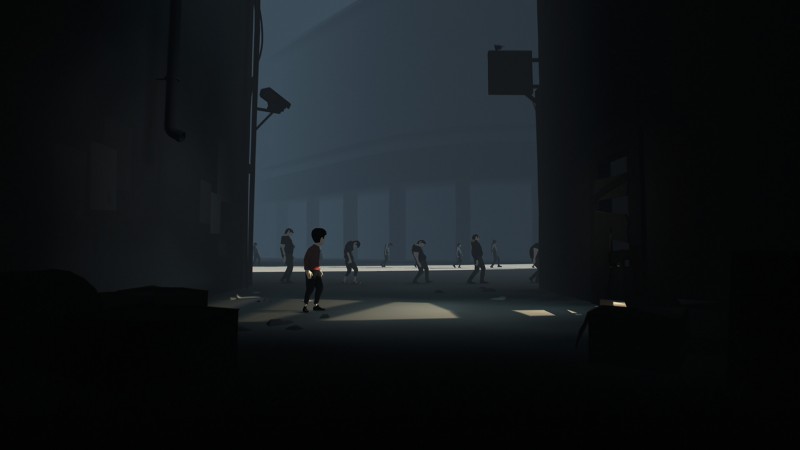 An unnerving exploration of a mysterious, bleak world filled with Brutalist architecture and horrifying government operations, Inside is startling from the get-go and only grows more terrible by the end. Like Evangelion, Inside makes a visceral spectacle by mining atrocities and has an unforgettable conclusion as a result.

Read our review of Inside here. 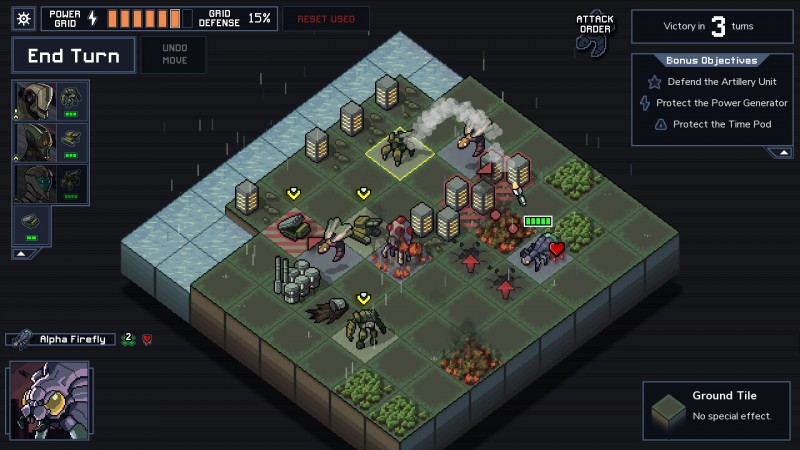 Unlike the vast majority of titles here, Into The Breach actually isn’t that somber or bleak. However, it is a game where you pilot giant robots to stop monsters from destroying cities, which is definitely a huge focus for the show. So if you want something that more imitates the battles of Evangelion but not its overall tone, this is the game for you.

Check out our review for Into The Breach here. 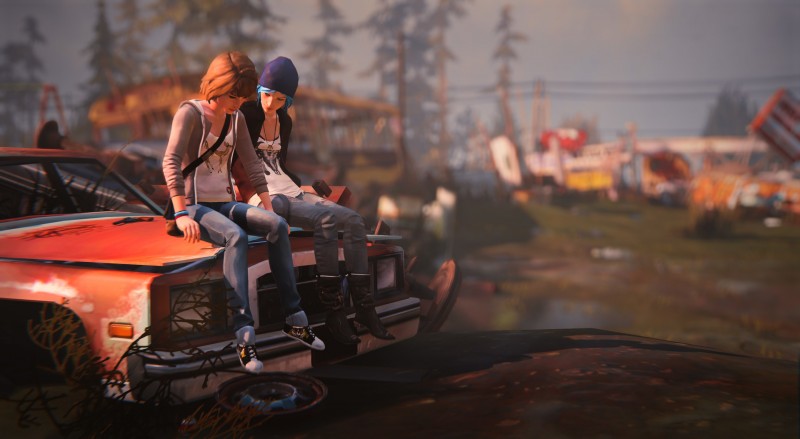 For all of its focus on war, the failure of society and the hellish horrors that exist in and out of our minds, Evangelion is also a story about children and the pressures put upon them to fix the failures of their parents. Life is Strange mines a similar vein, focusing on the trials of adolescence. High school student Max Caulfield not only must navigate her personal relationships with friends, bullies, and family but also confront the fact that she mysteriously has the power to rewind time and change events. 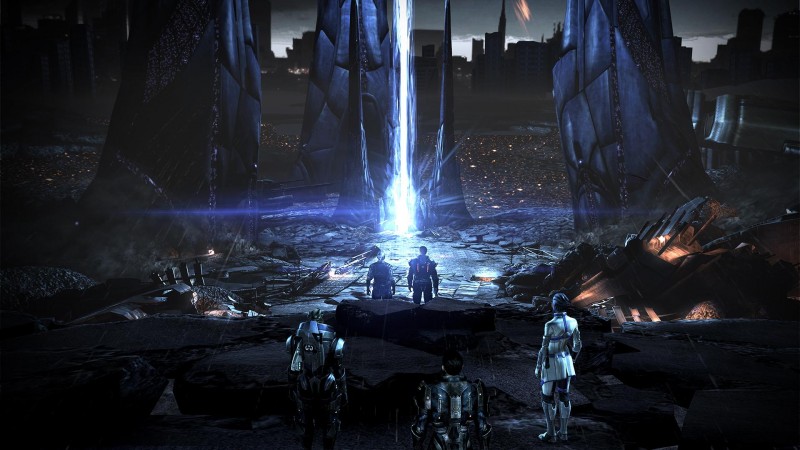 Mass Effect is easily one of the greatest series in video games, and much of its appeal is on making difficult choices that shape the galaxy. Mass Effect 3 is the game where, after several long years and many hours of player investment, we got to see the devastating consequences of those choices. The biggest moments in Mass Effect 3 are easily on par with the largest key moments of tragedy in Evangelion, especially when it comes to certain scenes where the fate of entire alien races are decided.

For more on Mass Effect, check out this deep-dive on the choices of that series I wrote for my column, The Virtual Life. 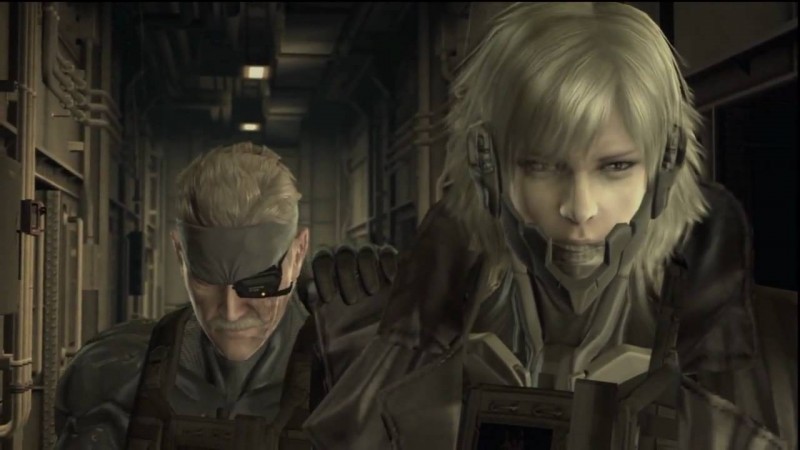 Metal Gear Solid has never shied away from confronting the traumatic effects of war, even when celebrating violence in the same breath with slo-mo battle ballets that move between arterial spray and characters mourning the effects of warfare on their lives. It’s the sort of compelling fusion (some would argue dissonance) that makes Evangelion so powerful as well.

While all of Metal Gear Solid contains these sorts of scenes and exchanges, it’s the fourth game that hits the hardest, as age and despair bear down on our already exhausted and traumatized group of heroes. 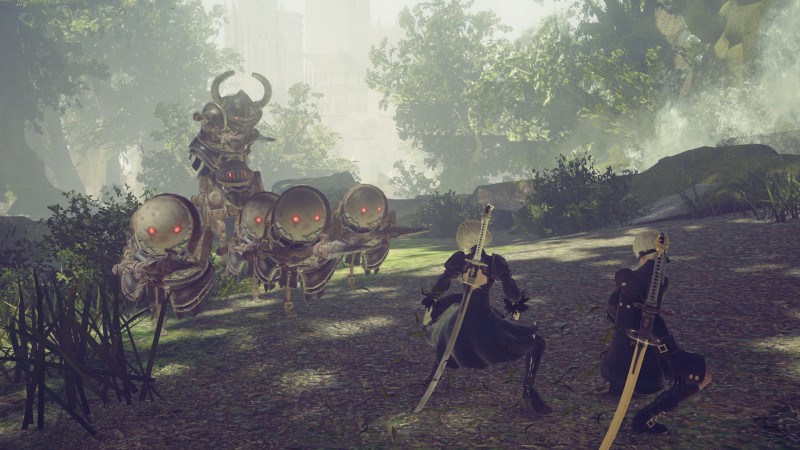 The original Nier was pretty dang weird and wild on its own, featuring damaged yet likable characters in a broken world as well as multiple endings requiring you to play through the game to get to the true ending. Automata traded fantasy tropes for sci-fi, focusing on androids fighting an endless proxy war with robots. Automata is a bold, ambitious, messy game that often bites off more than it can chew and can often test the player’s patience as much as it does their reflexes, but its successes are massive and endearing, not to mention more than a little heart-wrenching. As far as weird-to-somber ratios go, there’s probably no game on this list that gets closer to matching Evangelion than this one. 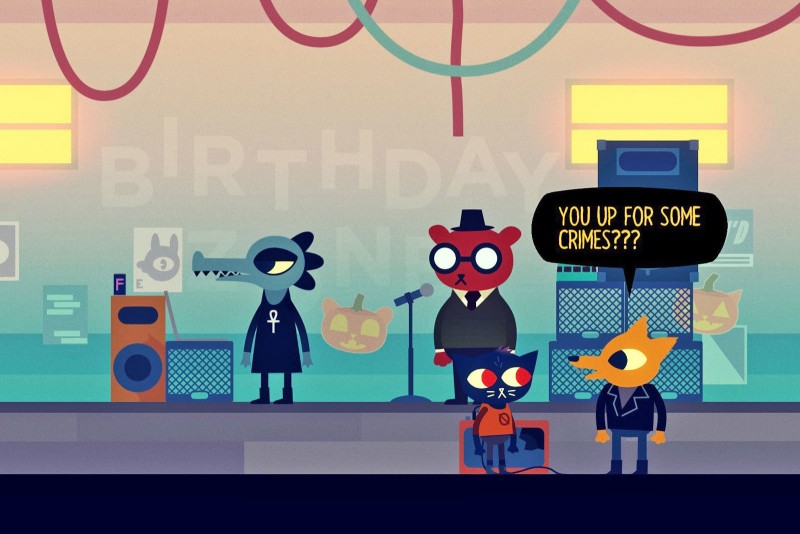 Night In The Woods

Breakdowns are a huge part of both Evangelion and Night In The Woods. Mental and emotional breakdowns, not to mention the grinding breakdown of society and how people respond to it with despair, humor, and even dollops of foolhardy hope. The difference between the two is that Evangelion blows everything out to 11, while Night In The Woods, outside of its cozy anamorphic aesthetic, takes a surprisingly mundane approach to those themes. Sure, it’s the end of the world, but that doesn’t mean we can’t derive value from facing that overwhelming hardship with friends at our side. 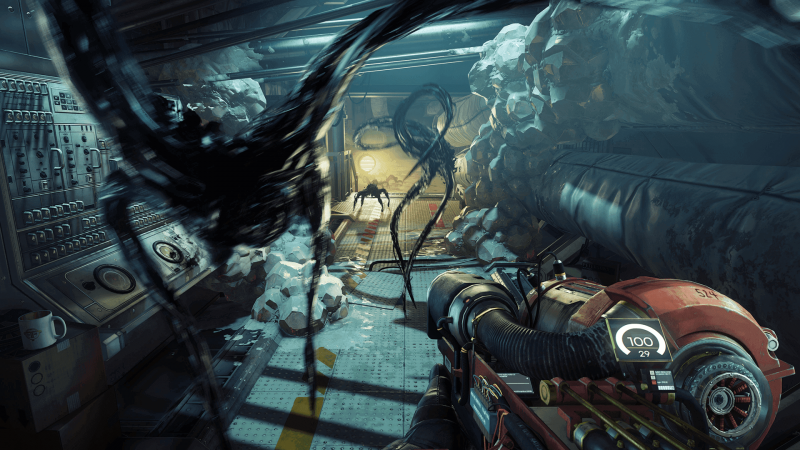 Another key focus of Evangelion is how much humanity diligently works to create its own suffering and despair. Similarly, the monsters of Prey are the creations of human arrogance. The price for that arrogance, without getting too much into spoiler territory, is pretty steep.

For more on Prey, check out our review. 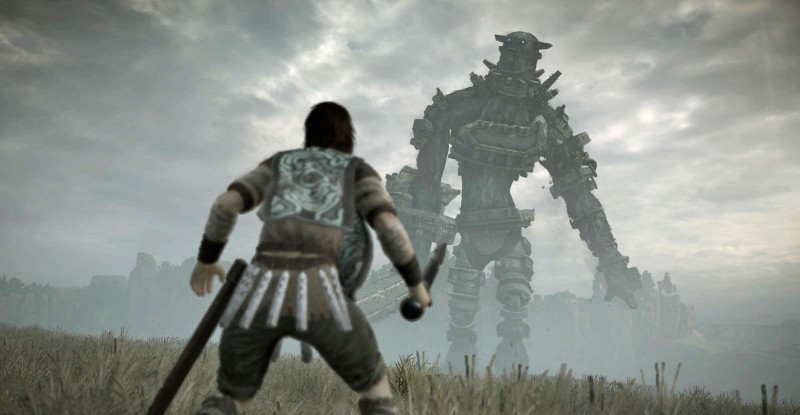 Shadow Of The Colossus

Sure, it isn’t sci-fi, but the somber mind games of Shadow Of The Colossus’ narrative, punishing you for your successes as you trudge toward a devastating finale, finds more than enough kinship in Evangelion‘s sense of futility.

For more on Shadow Of The Colossus, check out our review of the recent remake here. 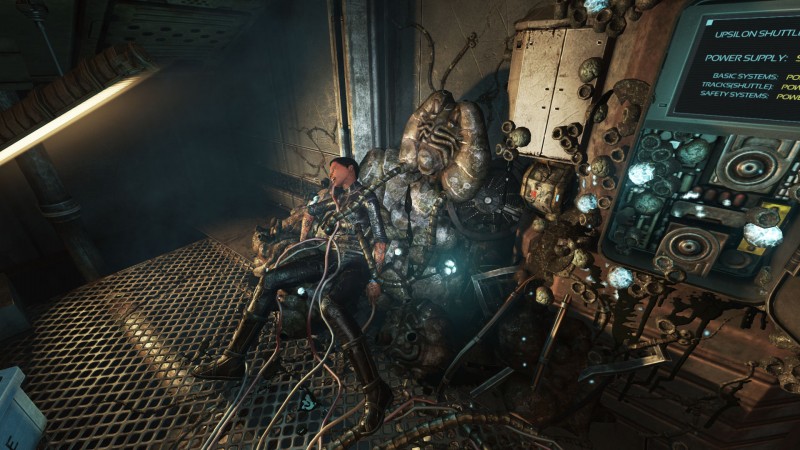 Like several of the games on this list, you want to know as little about Soma as possible before playing it. The world has ended, you’re under the ocean in some sort of facility, and humanity’s last chance at survival is in your hands. It’s a traditional kind of sci-fi story that gets more twisted (ala Evangelion) as it goes along.  Few games from this generation pack as much of a gut-punch as this one does. 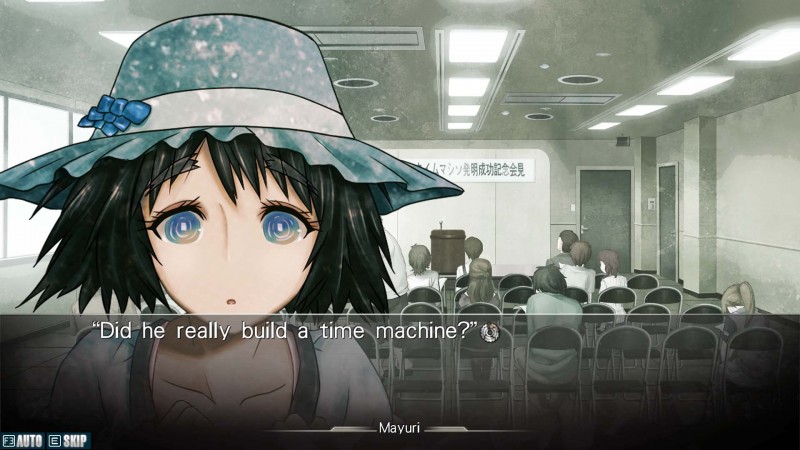 Throw out your timey-wimey notions of time travel. Outside of some weird fan service sequences, there’s little hijinks or warmth to be found in Steins;Gate, a visual novel exploring all the moral and philosophical complications that would happen if a time machine did exist. That might sound like familiar territory but Steins;Gate complicated nature, branching narratives, and thematic alignment put it more in the territory of something like Primer than light-hearted fare such as Back To The Future. 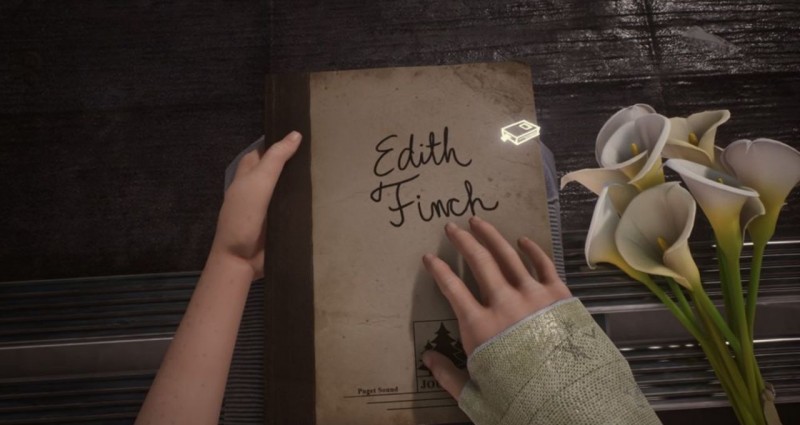 What Remains Of Edith Finch

Family and misery are common bedfellows, especially in Evangelion. To say that Shinji doesn’t have a great relationship with his father would be quite the understatement, and it’s that estranged relationship that probably forms much of the character’s psychological wounds. What Remains Of Edith Finch is all about family: the glory of it, the yearning for it, the difficulty of finding your place in it. It’s also one of the best narrative-focused adventure games in years. If you haven’t played it yet, and have a penchant for well-crafted melancholy stories, give it a go.

Our full review for What Remains Of Edith Finch can be found here. 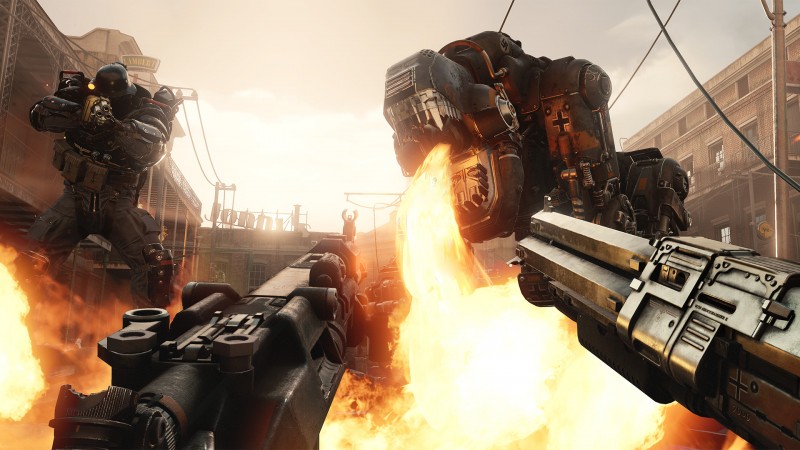 As I mentioned earlier, Evangelion is really fond of throwing its somber themes of alienation and war and trauma against a wall made of mecha pulp. MachineGames’ take on Wolfenstein also seeks to do the same thing, merely replacing the mecha part with Nazi-killing. A frenzied, constant ping-pong between zany shenanigans like killing nazis on the moon and scenes where characters ruminate on the meaning and futility of having a consciousness forms much of Wolfenstein’s appeal as well as its controversy.

Are You A Fan Of Neon Genesis Evangelion? Check Out These Games was orginially posted by Javy Gwaltney

Mr. X Is The Best And Worst Part Of Resident Evil 2

What Can You Make In Dreams After A Week? (Day 6)

Being A Gaming Parent In A Gaming World