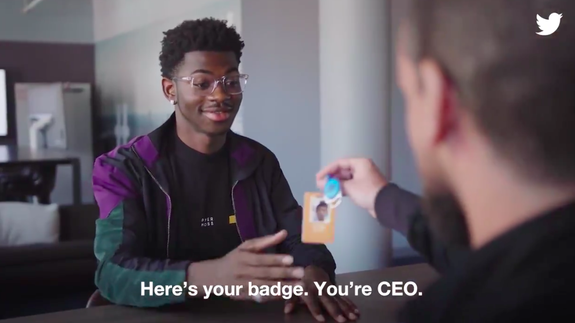 We have ourselves a new “Old Town Road” remix, people. Well, sort of.

Three days after Lil Nas X announced he was visiting Twitter’s New York headquarters to replace Jack Dorsey as CEO for the day, the @TwitterMusic account dropped a nearly three-minute-long video of the rapper’s time in the office, along with the words, “Old Town Road (CEO Remix).”

In the video, Lil Nas X sits down with Dorsey and declares, “I want to take over your position.” Dorsey replies, “You’re walking into a super stressful job.” Ha ha.

Lil Nas X then sits before Dorsey for a “job interview,” during which time the two discuss everything from Dorsey’s salary to his love for meditation during stressful times. (Spoiler alert: Lil Nas X sucks at meditating.) Read more…

Chrissy Teigen has some ideas for making Twitter better

Oh nothing, just Timothée Chalamet and Armie Hammer posing in front of each other’s magazine covers

Donald Glover tried to surprise his son with his ‘Lion King’ role, but it didn’t go to plan