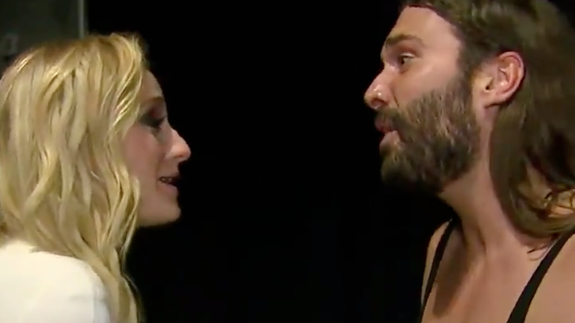 Before joining the cast of Queer Eye, Jonathan Van Ness was most famous for Funny Or Die web series Gay of Thrones. And before she was a Jonas Sister and hardcore Shawn Mendes/Camila Cabello shipper, Sophie Turner was most famous for playing the Stark sibling with the best hair (fight me), Sansa, on Game Of Thrones.

And when the two met backstage at the MTV Video Music Awards, the mutual fan-out reached a pitch that can only be heard by child queens and direwolves.

If you’re wearing earbuds, turn the volume down a little bit before you hit play on this. No, a little more.

Turner, spotting Van Ness, lurching towards him with both hands out like a perfectly coiffed zombie, at a pitch to shatter glass: “JONATHANVANNNESSSSSSSSS” Read more…