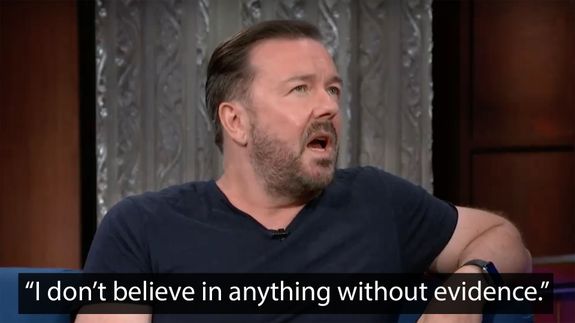 Often, when Ricky Gervais and Stephen Colbert get together, they seem to end up having deep debates about God.

Their latest meeting was no exception. During a discussion about Gervais’ Netflix series After Life and his new stand-up SuperNature, the conversation quickly turned to faith.

“Is magic and faith the same to you?” asks Stephen Colbert at one point. “Because they’re different things to me.”

“I don’t believe in anything without evidence,” replies Gervais. “That’s it. That’s all they have in common. And I have no problem with faith or spirituality — I feel it in different ways. I feel it when I see nature.” Read more…

Ricky Gervais and Stephen Colbert spoke about faith, and things got deep was orginially posted by Sam Haysom