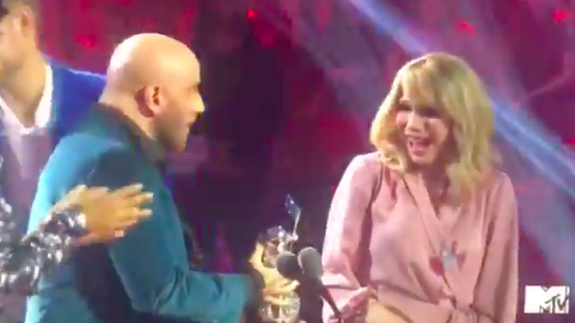 John Travolta has shown he isn’t above making fun of himself recently. joining Jimmy Fallon for a “Travolt-off.” And when it came time for his presenter spot at the VMAs — which, OK, sure — he made sure to nod to the last time anyone let him behind the mic at an awards show.

Handing the Video Of The Year winner’s envelope to co-presenter Queen Latifah, Travolta joked that he’d mess up the name — as he famously did at the 2014 Oscars, introducing performer Idina Menzel as “Adele Dazeem” — even dropping a live F-bomb.

But when VOTY winner Taylor Swift brought her entire crew of “You Need To Calm Down” cast members up on stage to accept their second trophy of the night, Travolta offered the Moonman to Jade Jolie — who was dressed, beautifully, in her signature Taylor drag. Read more…